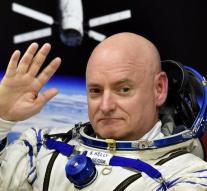 baikonur - Finally feel the American Scott Kelly and Russian Mikhail Kornienko gravity again. The two astronauts times in the night from Tuesday to Wednesday back to earth. She had almost a year to the International Space Station, the longest ever stay there.

Kelly and Kornienko get on the way accompanied by a Russian who was sitting on the ISS for six months. Their capsule is Wednesday at 02. 05 pm Dutch time disconnected from the ISS. They lower than their orbit. More than three hours later, they have to come down to the steppes of Kazakhstan.

The mission must clarify what a lengthy stay in space- weightlessness, confined and secluded- do with body and mind. Muscles go backwards example, bone decalcification and eyes become less. It should help in preparing for a trip to Mars for decades.

The predecessors of Kelly and Kornienko, including the Dutch astronaut André Kuipers remained about six months on the ISS. However, a space record have Kelly and Kornienko not. In the eighties and nineties stayed four Russians more than a year in the Mir space station.