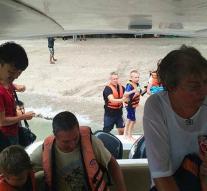 bangkok - In a collision between two tourist boats in Thailand, 19 people were injured. A person is serious about it, reports the Bangkok Post. As far as is known, no Dutch are involved in the accident.

The boats beat after the accident in the sea at Koh Khao Phing Kan. On one of the boats there were eleven Nores, four Belgians and a Thai guide with three crew members. On the other boat there were a group of Chinese tourists who were on their way to the famous James Bond Island.

About twenty people had to be taken out of the water. At the time of the accident the sight was bad.