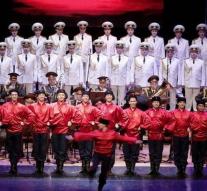 moscow - The crash of the Russian military plane crashing in December in the Black Sea was probably caused by a pilot's error. Russian researchers concluded Thursday that the plane lost air pressure and that the pilot ignored the signals of his instruments, as evidenced by an analysis of flight data. According to the BBC, the researchers thought the pilot might have been overtaken.

The aircraft disaster, which shortly after the start of the Sochi airport, caused all 92 passengers to live. On board the Toepolev-154, which was on its way to Syria, there were dozens of members of the Aleksandrov Ensemble. The famous chorus of the Russian army would be in progress for new years for Russian soldiers in Syria.

Previously, the researchers thought that broken vents on the wings had caused the crash. With the valves on the back of the wings, it decreases and rises. The pilot failed to intervene.