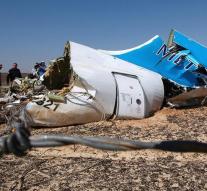 - "A bomb of terrorists is the cause of that last year on 31 October a Russian passenger plane crashed on a flight from Egypt to St Petersburg. By an explosion in the baggage hold of the Airbus 321, 22 minutes after takeoff in Sharm el-Sheikh, the unit fell from almost 10 kilometers altitude down into the Sinai Desert. All 224 passengers were killed."

"That is the conclusion of a study by a team of international aviation experts, the Russian newspaper Kommersant writes Wednesday. The explosion broke the tail of the plane. The Airbus company kogalymavia / Metrojet popped up immediately with the nose down and crashed. Most of the passengers died from the sudden change in air pressure."