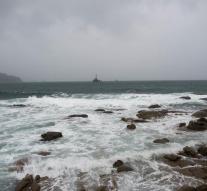 rangoon - The air force of Myanmar, which crashed last month in the Andaman Sea, was probably due to bad weather. Experts draw that conclusion after investigating data from the black box, state media reported Wednesday. At the accident, all 122 passengers died.

The device was in early June from the south on its way to Rangoon. The pilots lost control after flying an hour and a half when the device invaded a cloud and raised the wind. At that moment, in the air inlet of the engines, ice formation resulted in the Y-8-200F, a Chinese-style aircraft, eventually crashing.

Eventually 83 bodies could be stored. The victims are soldiers, relatives and crew.