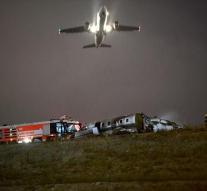 istanbul - Atatürk Airport, Istanbul's most important airport, was closed on Thursday evening for all air traffic after a landing run was crashed on a landing run and flown on fire. The four passengers- two pilots, a flight attendant and a passenger- could leave the station, CNN Türk de Chessna 650 Citation, in a timely manner and were only slightly injured.

The plane was on its way to Northern Cyprus but was already in trouble as a result of a failure. The captain immediately requested permission for a return and emergency landing. The fire brigade was immediately ready to get out.