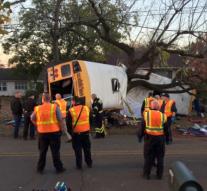 chattanooga - The driver of an American school bus crashed Monday in Chattanooga in the US state of Tennessee, the coach had possibly deliberately crashing. A mother of three students who were told the bus driver that just before the accident shouted: 'Are you ready to die?'

On the bus were 37 students in the Woodmore Elementary School, a primary school. Five of them were slain in battle, a sixth died yesterday in hospital. There were 23 passengers were injured, of whom two or three very serious. feared for their lives.

The woman who made the shocking statement, lost her six-year-old daughter in the crash. One of her other children told her about the comment made by the driver. The story is not confirmed by others, but children from the bus have not been heard as witnesses by the police.

The bus driver was arrested. The 24-year-old man has to answer five charges, including manslaughter in traffic and dangerous and reckless driving, reported the US newspaper USA Today earlier. The man was not under the influence of drink or drugs. However, he deviated from the prescribed route and he exceeded the speed limit of 50 km / h.