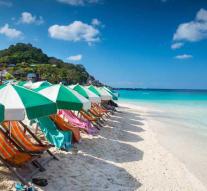 bangkok - Koh Tao, one of the most popular islands in Thailand, is for many a paradise on earth. But the island is startled by an increasing number of mysterious murders, rapes and disappearances.

Once again Koh Tao is in the spotlight, but not as Thailand would like to see. A 19-year-old British tourist says he has been drugged, raped and robbed on the island, and warns travelers to stay away. She has done a lot to the authorities at the dive destination, who accused her of not taking her report of rape seriously.

The young woman from London claims to have been attacked early in the morning on the same beach where two British tourists were slaughtered four years ago. In an interview with the British newspaper The Times she tells how the police on Koh Tao tries to cover up the truth about the violence, for fear that it damages the lucrative tourism sector on the island.

'I advise other young people to stay away. I will never feel safe on Koh Tao again. I do not want to discourage people from going to Thailand- it is one of my favorite countries- but it is a beautiful place with a dark side. '

In the past six years, ten vacationers have perished mysteriously on Koh Tao. Most of them near the Sairee beach, where the two British tourists are also killed. It has Koh Tao, which according to the inhabitants is run by powerful Mafia families, the name 'island of death' delivered. The body of the 30-year-old Belgian Elise Dallemange was found last year in the jungle on the island, half eaten by lizards.

The police will in most cases dismiss it as an accident or suicide. Even at the death of the 29-year-old Frenchman Dimitri Povse, who was found with his hands tied to his back, the conclusion was suicide. But the relatives of the victims blame the authorities for a lack of thorough investigation. For the murder of Witheridge and Miller, two poor migrants from Myanmar have been sentenced to death, a matter that, according to those involved and human rights organizations, stinks from all sides.

Family and friends of the victims who deal with the image of Thailand as idyllic holiday resort, and others who warn against traveling to Koh Tao, receive death threats. In addition, twelve people who shared news about the recent rape of the 19-year-old British on Facebook were arrested. Suzanne Buchanan, the chief editor of local newspaper The Samui Times who reports on crime on Koh Tao, is currently being investigated by the police.

'The Thai police seem to be using the law against cybercrime against anyone who questions their lousy bad investigation of the recent rape case on Koh Tao,' said Brad Adams, Asia director of Human Rights Watch. 'The authorities must immediately revoke these false charges. '