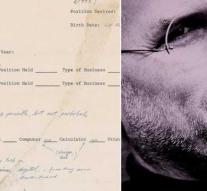 los angeles - A letter of application that Steve Jobs wrote about three years before he co-founded Apple, has raised over 141,000 euros on an internet auction in the US.

Jobs wrote the letter in 1973. It is not known which job and which company he applied for.

According to the auction house in Boston, the buyer was an internet entrepreneur in England who wanted to remain anonymous. Calculated on a revenue of about 40,000 euros.