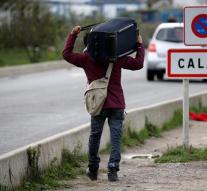 paris - Migrants in Calais must receive water and sanitation from the government, otherwise there is a inhuman treatment of the strangers. This has been determined by the French State Council on Monday in a climax of legal rope over the jungle in Calais.

The French Conseil d'État turned to the municipality of Calais and the Ministry of the Interior. They assume that the number of migrants decreases significantly if they are not taken care of. They were therefore appealed against the judgment of a judge in Lille. At the end of June, it had decided that there should be facilities for the homeless immigrants in Calais.

The authorities had previously evacuated and thrown out a wreck area known as 'jungle' because those migrants would attract. Human rights organizations and dozens of migrants together have successfully challenged the evacuation with the judge. The migrants in Calais want to England.