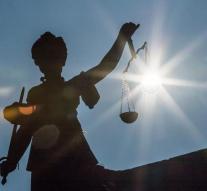 - A couple from Germany Isselburg, a town near the Dutch border under Doetinchem, was sentenced on his wedding day for drug trafficking. The 39-year-old and 32-year-old couple, who have two children, holding hands heard the verdict in Bocholt on the fifth anniversary of their marriage.

The three defendants punctuated their coffers with drug crime. The woman, for instance is found guilty she twice smuggled several kilograms of cocaine from Curacao to the Netherlands. Once she went to smuggling trip with husband and kids and once with two girlfriends. For each delivery, the couple got 17. 000 of the drug gang which they provided services.