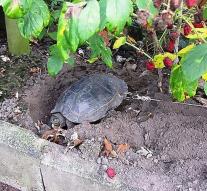 dortmund - A German couple who went on holiday tied their tortoise to a tree in the garden. The Dortmund couple is now charged with serious animal abuse. The animal was fastened with a long steel cable fastened to the shield. A big hole was drilled in it.

The helpless animal, who had no food or drink, was discovered by the couple's neighbors, who saw the turtle motionlessly lying on his back in the bushes. The fire brigade was alarmed, which released the animal. The turtle was brought to a vet. He claims that the turtle should have had a lot of pain. 'Such a shield is not at all senseless, but many people think so. '

The owners of the tortoise, who kept themselves alive thanks to the raspberry bushes in the garden, are still on holiday. They do not get the animal back, reported German media.