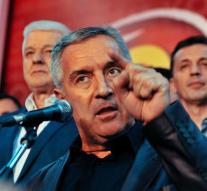 - Russian nationalists were the drivers of a failed attempt at a coup in Montenegro. There is no evidence that the Russian government had anything to do with the plan, the Montenegrin special prosecutor Milivoje Katnic said according to the BBC.

According Katnic was included the intention to liquidate the pro-Western Prime Minister Milo Djukanovic. For this, the conspirators wanted to engage a professional sniper.

The plan ultimately failed. Police arrested on election day approximately twenty suspects. It's people with the Serbian and Montenegrin nationality, but the prosecution says it has evidence that two Russian nationalists were behind the alleged plot.

It is unclear where the two Russians have been or where the evidence consists of. The suspects wanted to prevent, according to the prosecutor that the Balkan state would join would tighten up NATO and its ties with the European Union.