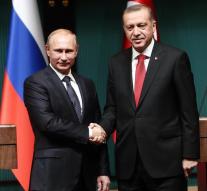 - For the first time since Turkey last year brought down a fighter jet in Russia, meet Recep Tayyip Erdogan and Vladimir Putin together. The relationship between the two countries were severely disrupted by the incident, which Russia responded with economic sanctions. The coup attempt against the Turkish president, however, brings the two heads of state together again during a summit Tuesday in St. Petersburg.

Two weeks before the foiled coup, Erdogan had been made for a rapprochement, to apologize for the downing of the jet. Russia lifted the subsequent ban on charter flights to Turkey and Erdogan invited for the summit.

The two presidents have much in common. They both use a kind of populist authoritarianism and both have a deep distrust of the United States. Erdogan looks reproachfully to the US because they are home to his opponent Fethullah Gulen, who was behind the attempted coup according to Ankara. Moscow thinks Washington too big a role demands on the world stage.


Since the military uprising Erdogan's style more and more resemble those of Putin. He's tough action against anyone who had anything to do with the coup, according to him, not only military but also journalists, scientists, teachers and judges. Approximately 60. 000 Turks have been suspended after July 15 or lose their jobs, while 6,000 people have been arrested. According to Human Rights Watch have tortured many of them.

Turkey and Russia to fight in Syria along on opposite sides, which Turkey supported increasingly seems to have chosen the wrong way to rebel. With Russian support has strengthened the position of the Syrian government forces, while the Americans just have powerful Syrian Kurds. Which Kurds have now also support from Moscow, where they could even open an unofficial embassy.

Erdogan needs Putin's help to prevent the Kurds begin an independent state in northern Syria. Russia wants to transport gas via Turkey to southern Europe, thus avoiding Ukraine. The two men have to attract interest in a line under the incident jet.