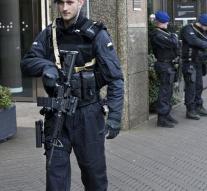 strasbourg - The measures envisaged by the Dutch government to fight jihadism, does not sit well with the Council of Europe. In a letter to the Ministers Ronald Plasterk (Interior) and Ard van der Steur (Security and Justice), the Organization for Democracy and Human Rights in Strasbourg demands explanation over three bills.

Commissioner for Human Rights Niels Muiznieks wants clarification on setting 'of a territorial and restraining certain persons 'and the possibility' a person who can be linked on the basis of his behavior with terrorism an international travel ban on lay.

The plan to rob someone through a ministerial decree, without the intervention of a judge, of his freedom of movement is also wrong to the intergovernmental organization. The proposed amendment to the Law on Dutch citizenship, the second passport may be revoked, smacks of discrimination of Moroccan or Turkish jihadists, said the Commissioner.

The power extension for the intelligence and security service, which large groups of people may keep an eye on the council do not like. Muiznieks warns that repressive measures lead to stigmatization and alienation of certain social groups.

Prevention is according to him the key in the fight against terrorism. He warns that some measures might conflict with the human rights treaties signed by the Netherlands.