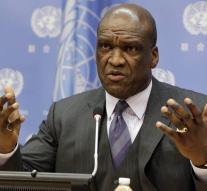 - The suspicion of corruption diplomat John Ashe is deceased. Said his lawyer Wednesday. Ashe was from 2013 to 2014 President of the United Nations General Assembly. He fell from grace when it became clear that the US authorities accused him of taking bribes from Chinese businessmen.

Ashe would have had $ 1.3 million of Chinese people for whom he would settle major UN contracts for real estate projects. These included a conference center in Macau.

The 61-year-old diplomat from the Caribbean-state of Antigua and Barbuda died, according to his lawyer of a heart attack.