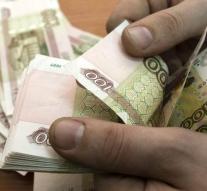 - "A senior Russian corruption fighter was arrested on suspicion of taking the equivalent of 123 million euros in kickbacks. Dmitri Zagartsjenko is the deputy head of the committee on economic security and the fight against corruption in the Interior Ministry."

"The money was cash found in his car, study at home and in the apartment of his sister in Moscow, said the news agency RBC. The annual income of Zagartsjenko amounts to 41 000. Investigators prosecutors put the official in connection with the bank disbanded last year NOTE. This financial institution was dismantled by the government in 2015 because they had exceeded the bank's rules extensively."