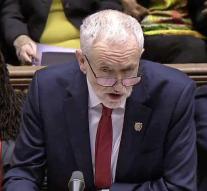 brussels - In addition to British Prime Minister Theresa May, opposition leader Jeremy Corbyn will also be in Brussels on Thursday. He will present the alternative Brexit plan of his Labor Party to various European leaders…

Corbyn will try to convince European leaders that his plan comes through the House of Commons. According to his party, Corbyn speaks with, among others, seven heads of government and the European Commission's Secretary General, Martin Selmayr.

An earlier alternative plan from Labor was voted down in the House of Commons. Among other things, the largest opposition party wanted the United Kingdom to remain part of a customs union with the European Union after the Brexit.