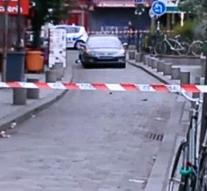 - A policeman was stabbed Thursday night during an arrest of three women in Paris that are linked to a car with gas cylinders was found earlier this week at Notre Dame. One of the women was shot by another agent.

The woman and the agent are transferred to hospital. It is not clear how serious their injuries.

The car, a Peugeot 607, was discovered by the anti-terrorist brigade of the French police on the Quai de Montebello along the Seine in Paris. In the car they found discovered seven gas cylinders. The car belongs to a man standing on a list of potential terror suspects. He was previously arrested along with other suspects.