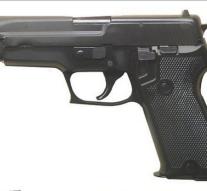 bremerhaven - A reporter from the German newspaper Nordsee-Zeitung on Tuesday injured at the police during a press briefing about a new service pistol at the police force of the city of Bremerhaven in northern Germany.

At the presentation of the new service weapon, a Walther P99, was apparently shown the old gun. The SIG Sauer P6 was fired accidentally. The reporter was hit in his thigh and had to be taken to hospital,
German media report.

Making the gun went off is not known. The journalist goes to good conditions, said a police spokesman.