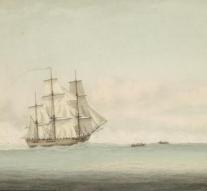 newport - The wreck of one of the most famous ships in history, the Endeavour Captain Cook might have been found. Maritime archaeologists in Rhode Island say there are 80 to 100 percent sure that they found the ship on the bottom of the harbor of Newport.

Cook used the ship for his first voyage of discovery to Australia and New Zealand between 1769 and 1771. In 1778 the ship would be renamed Lord Sandwich, and are used to transfer British soldiers during the American Revolution. In the same year thirteen ships were sunk in the harbor of Newport, including the Lord Sandwich.

The maritime archaeologists (rimap) present their findings Wednesday.,, It will be cause for national celebration in Australia as rimap the Lord Sandwich, formerly Endeavour, identifies' she put a notice.