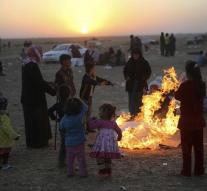 baghdad - A convoy of the Iraqi Red Crescent for the first time since the start of the offensive in Mosul relief supplies delivered to the population in the besieged city. That sister organization let the Red Cross know.

The rescuers shared include food, blankets and winter clothing off. They knew through roads that were captured by the Iraqi army and security to get into the city.

The Iraqi army began October 17 with an offensive to retake the city on the fighters of the Islamic State.