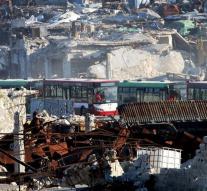 damascus - The convoy of evacuees from eastern Aleppo has arrived safely in al-Deen Rashi, the area where the Syrian rebels fighting to have the shots against the Assad government. They've announced Monday. The news was confirmed by the Syrian Observatory for Human Rights.

The war observer based in England said it was about 21 buses. They could Sunday night after hours of waiting still drive off in no man's land between government forces and rebels in the districts largely in ruins.