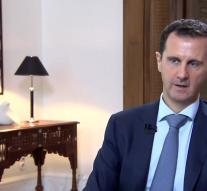 damascus - Talks about a cease-fire between Syrian rebels and the Syrian army have failed. That the Syrian Observatory for Human Rights reported Thursday.

The two sides are fighting each other in the area Ghouta in the Syrian capital Damascus. The pause in the fighting should last for fifteen days and Thursday should go.

Why the talks have failed is not known.