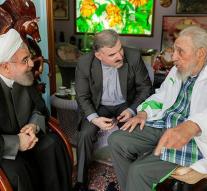 "They met Monday in the private home of Castro and talked about international relations and threats to peace. Rohani also spoke with President Raul Castro, brother of Fidel which has been in power since 2008."