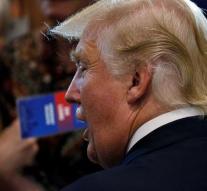 - Republican presidential candidate Donald Trump has almost come to level with his rival Hillary Clinton, according to a new poll by Reuters / Ipsos. Trump, on Thursday accepted the Republican nomination, could count on the support of 38 percent of American voters. Clinton with 41 percent still ahead, but it is by neglecting the margin of error of four percent.

The conventions of the two major US political parties are also intended to introduce the nominee to the American people and it is common for the then presidential candidate in the polls scores better than before. So Trump was the opening of the Republican convention Monday in Cleveland still 10 percent behind Clinton.

Monday starts the Democratic party convention in Philadelphia, where Clinton in all likelihood will be officially nominated as presidential candidate for the Democrats.


The poll last week was conducted among 1036 likely voters.