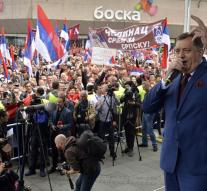 - The regional government of Republika Srpska, the autonomous Serbian part of Bosnia, the population puts Sunday the question of whether January 9 should be the national holiday of the republic. The Constitutional Court of Bosnia declared the referendum illegal last week.

The court may proclaiming January 9 a national holiday hurt the Bosnian Muslims. On that date was declared the first Bosnian Serb republic in 1992. Then, a bloody war broke out in Bosnia between Serbs, Muslims and Croats. Moreover, Muslims might feel disadvantaged by the choice of January 9 as a national holiday since that date on the calendar is also an Orthodox Christian holiday.

The United States and the European Union fear that the new referendum will break out again unrest in Bosnia. Russia has expressed its support for the referendum.

Besides the Muslim-Croat federation Republika Srpska, one of the two parts of Bosnia exists.