Home / World / Controversial labor is by 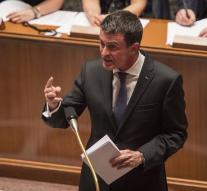 - The French parliament on Thursday adopted the controversial labor law. Because there is no motion of censure was tabled, did not need a vote.

The law should make it easier to lay off workers and adopt. Over the past three months, there were numerous street protests by opponents of the law and numerous strikes by the unions.

French Prime Minister Manuel Valls has the law with special constitutional powers piloted through parliament. By putting opponents 24 hours had the time to file a motion of censure but that never came.