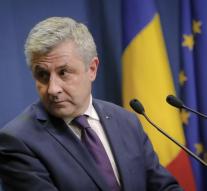 Where the government of Prime Minister Grindeanu Wednesday a no-confidence motion by the opposition easily survived, Iordache there seems to be sacrificed to appease the unrest in the country..

Despite the withdrawal of the bill that abuse of office until 45. 000 not put more offense, the Romanian population still goes by the thousands to the streets. Thursday fell throughout Romania a huge snow, but that did not protest the residents. The center-left government can count on a comfortable majority in parliament.

Grindeanu left a few days ago that he would not resign and that the government remains in place. He announced that it will launch a new legislative proposal.