Home / World / Controls within EU limits may be extended 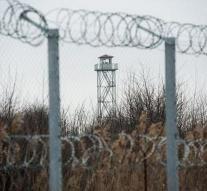 The five countries were in May green light for six months targeted and limited border controls. Brussels agreed with this curtailment of freedom of movement after it was established in the Schengen area that the Greek border and asylum system was not functioning properly.

The tens of thousands of migrants currently residing in Greece may pull back to richer parts of Europe as border controls would be lifted now, the committee fears.

According to the committee, the situation is by now stabilized, but is still not all the conditions required ' return to Schengen '' met. EU Member States will try to examine the proposal.