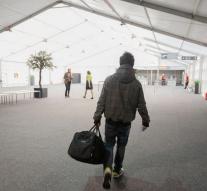 brussels - The tents at the Brussels airport in which passengers since the attacks of March 22 to undergo a further check, go away. The so-called prescreening will be abolished on November 7 outside the departure hall, it was announced Wednesday.

Instead, there are less visible security measures such as cameras that can recognize faces and license plates. Also barriers placed at the entrance to the national airport in Zaventem. Furthermore, agents receive training to better recognize suspicious behavior.

The cost of the measures in the millions. The intention is that the safety system is also used in the future to regional airports in Belgium.