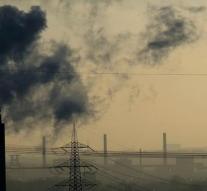 geneva - The concentration of carbon dioxide gas in the atmosphere has risen above the four hundred parts per million in 2015 for the first time in the world. This year further increased CO2 levels and from all appearances will make for many generations with high concentrations of the greenhouse gas. So says the World Meteorological Organization (WMO).

The WMO attributes the growth spurt to El Niño, a weather phenomenon caused by changing ocean currents. In tropical areas, this led to dryness, and decrease in the capacity of woods, plants and seas in order to absorb CO2. ' El Niño is over, but not climate change, '' said Secretary General Petteri Taalas of the WMO.

Greenhouse gases like carbon dioxide, methane and nitrous oxide originate mainly from industrial, agricultural and domestic activities. They retain the heat in the atmosphere, causing the temperature to rise on the earth. The main culprit, according Taalas CO2, which for thousands of years in the atmosphere and remain in the oceans even longer.