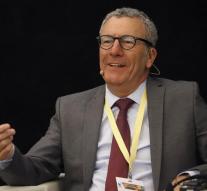 brussels - The fallen mayor of Brussels, Yvan Mayeur, goes out of his party, the Party Socialist (PS), after his departure earlier this month. He is not awaiting the threatening expulsion on Friday by the ethical commission of the Brussels PS.

In a letter of resignation to the chairman of the commission, the French-speaking ex-mayor writes: 'I may have made mistakes. I regret that very much. '

Mayor's position in the party was under pressure since his resignation as mayor of the Belgian capital. The socialist turned out to be paying close attention to assistants in the homeless organization Samusocial and water company Vivaqua, where he hardly did anything.

In addition, Mayeur, according to Belgian media, on top of his mayor's wages was a major beneficiary after he was no longer elected in the federal parliament in 2014. In total, his income would amount to more than a quarter of a million.

'I am a socialist militant,' Mayeur wrote in his letter to the PS commission. 'I was always convinced that I acted in the interests of our ideal. '

The party of president and former prime minister Elio Di Rupo holds a conference on sunday on measures to combat batches of party bunks on Sunday. Earlier this year, all PS heads dropped due to scandals around payments.