Home / World / Contested Bin Salman back on a journey 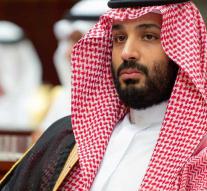 riyad/paris - The controversial Saudi Crown Prince Mohammed bin Salman bin Abdulaziz al-Saud went abroad for the first time since the Khashoggi affair on Thursday evening. He is the first to stop an official visit to the neighboring United Arab Emirates on a journey through 'fraternal Arab countries' as the court describes it in Riyadh.

The 33-year-old trustees in Saudi Arabia have been discredited at home and abroad after the horrendous murder of a Saudi journalist, Jamal Khashoggi, at the Saudi consulate in Istanbul at the beginning of October. He was murdered by a 'heat team' that had come from Saudi Arabia. Khashoggi lived in the US and worked for The Washington Post. He was very critical of the crown prince and the rest of the Sauds clan.