Home / World / Contact with children under debris after quaking 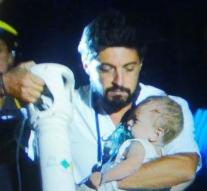 rome/den haag - Italian firemen have put a rescue operation on a row for some children who were buried under the rubble by the earthquake Monday on Ischia Island. A spokesman for the fire department said there was contact with the children.

'We hear their voices and by talking to them we try to reassure the children. 'According to the Italian press agency ANSA, it has now been possible to provide the children with water.

The quake on the island on the coast of Naples had a power of 4.3. As a result, two killers died and injured tens of people.

The Ministry of Foreign Affairs has so far not received any reports about Dutch people who have been in trouble.