Home / World / Consultations between US and Russia on Syria 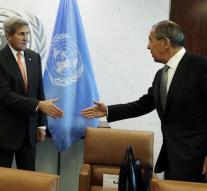 moscow - Russian Foreign Minister Sergei Lavrov and his US counterpart John Kerry meet Saturday in Lausanne to discuss the situation in Syria and think about the steps needed for a political resolution of the conflicts in the country.

That Moscow announced Wednesday. Little later Washington confirmed the appointment of Kerry with Lavrov in Switzerland. The intention is that government representatives of Saudi Arabia, Turkey, Qatar and Iran join in the discussion. Sunday Kerry travels to London to meet with European foreign ministers and international partners on common positions to address the crisis in Syria.

A week ago, the Americans suspended the consultations with Russia on a new cease-fire in the heavily besieged city of Aleppo. Because both superpowers have completely different interests in Syria, the danger of escalation across the region and even outside the Middle East by no means hypothetical.

The Security Council has so far also can not break the deadlock. Last weekend, Russia and France blocked a UN resolution by mutual veto. Russian President Vladimir Putin then decided to cancel a visit to Paris on October 19, but Wednesday he left through news agency Tass yet know again that his relationship with colleague Francois Hollande are good and that France is 'one of our major partners in Europe. '