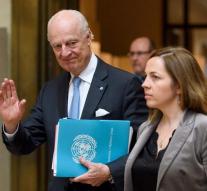 astana - Russia, Turkey and Iran will not discuss the escalation of the civil war in Syria this coming week. The consultation was scheduled for 12 and 13 June in Kazakhstan. The Foreign Ministry of that country said Thursday that the three had terminated.

It is not clear why the consultation does not continue and when it can resume. The three powers have already gathered in the Kazakh capital Astana. The Syrian government and rebel groups then sent delegates to Astana.

A group of rebels supported by Saudi Arabia ran out of harmony at Astana early this month. It was then talked about creating certain zones where no more would be fought. The rebel delegation complained about the continuing air attacks and bombings.