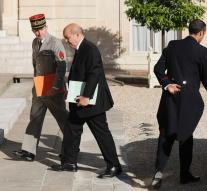 - French President Francois Hollande's Friday morning meeting with the Defence Council in response to the massacre in Nice Thursday on the national holiday. The crisis meeting brings Prime Minister Manuel Valls, the Defence Minister Jean-Yves Le Driant and the top of the assembled forces. Interior Minister Bernard Cazeneuve from Nice takes part in the consultations.

In Nice Thursday evening a man with a truck destined for refrigerated transport carnage wreaked on the Promenade des Anglais, where a crowd had gathered for the fireworks. Hollande, the massacre which certainly 84 people were killed Friday labeled as terrorist attack.

The truck was Tuesday in a commune bordering Nice, Saint-Laurent-du-Var are rented for a few days. The identity papers of the tenant, a 31-year-old man of Tunisian origin, were found in the truck. It is not yet known whether the perpetrator is killed the same man.