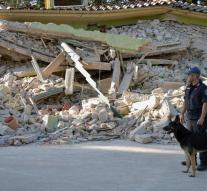 - The Italian public prosecutor is investigating whether the collapse of more than one hundred buildings in the earthquake Wednesday someone to charge. The prosecution suspects that non-compliance with building codes.

,, The events can not be attributed to fate, '' said prosecutor Giuseppe Saieva La Repubblica.,, If these buildings were built as in Japan, they had not collapsed. ''


The earthquake took at least 290 lives. The death toll could still rise because not nearly all the rubble has been cleared. The rescue and salvage work is difficult because of the many aftershocks.