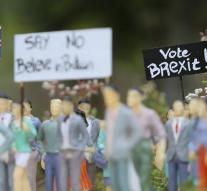 london - The conservative British newspaper hopes that leaving Britain the European Union. The newspaper calls on its readers to vote in the referendum on Thursday for a brexit.

The Daily Telegraph was once the patron of Boris Johnson, one of the leaders of the so-called Leave-camp. Johnson then wrote highly critical articles on the EU, which he attended as a correspondent in Brussels.

The British press is almost equally divided on the issue as the population. The most read newspaper in the country, the tabloid The Sun, The Sunday Times and several other newspapers have endorsed a brexit. Remain The camp enjoys the support of include The Times, The Guardian and The Economist.


According to pollsters are the advocates of a longer stay in the EU in recent days, a nose for the brexiteers. A new poll by The Daily Telegraph confirmed that image Monday.