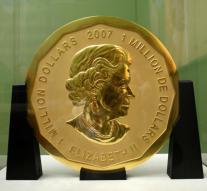 - BERLIJN- Three and a half months after the robbery of a very heavy gold mint from the Bode Museum in Berlin, the police has made several arrests. This happened during a raid in several homes in the district of Neukölln, according to the authorities. Further details are not yet known.

Thieves stole the 100 kilo heavy Canadian gold coin with the image of Queen Elizabeth II in the museum in March. Of the colossal gold piece of nominal 1 million Canadian dollars, there are only five. The Canadian royal coin produced it in 2007. The current gold value is about 3.7 million euros. Given the weight of the copy, the police went out of several perpetrators.

The perpetrators had entered the building in the early morning at the metro line, which was immediately adjacent to the museum. A ladder and a wheelbarrow left behind them.