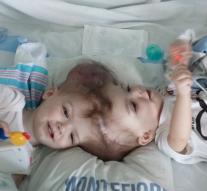 - The 13-month-old Jadon and Anias McDonald who were born fused to each other with their heads, have been successfully separated from one another in a hospital in New York.

The boys have to undergo more surgeries to reconstruct their skulls, CNN reports.

The operation was led by Dr. James Goodrich, a leading expert in the field of this type of surgery. It was the seventh siamese twins which he operated and only the 59th worldwide since 1952.

'Two separate babies!' Shouted mother Nicole on Facebook. 'But I still have concerns about the uncertain future... The coming months should show how to restore the boys and only after a few weeks we will know for sure. '

Nicole and her husband had to take a very tough decision for their children. The operation took great risks with it even to the death of the two children could result.