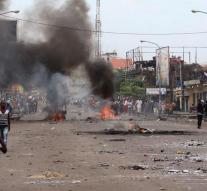 - "Congolese police on Monday clashed with protesters against the government in Kinshasa. At least five civilians and three policemen were killed, police reported."

"An eyewitness saw protesters in the city Limete for the body of a cop stabbing fire. The enraged crowd wanted revenge for the shots allegedly fired the police on demonstrators. Order Troops have certainly killed seven protesters, said director Georges Kapiamba of the local human rights organization ACAJ."