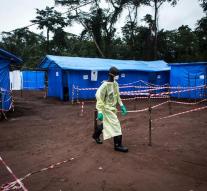 kinshasa - The authorities in the Democratic Republic of Congo have officially declared the latest ebola epidemic on Saturday. The first case of the last outbreak was established approximately two months ago.

This occurred in remote areas in the north-east of the country, making distribution very limited. Eight people were diagnosed with the disease. Four of them passed away. It was the eighth outbreak in Congo since the discovery in that country of the virus in 1976. No country has so often been affected by ebola attacks like the Congo.

In 2014, 42 people were killed in the Democratic Republic of Congo by the virus. At the same time, the disease killed 11. 300 people in Guinea, Sierra Leone and Liberia.