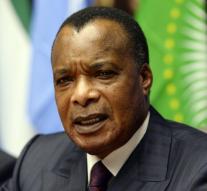 - President Denis Sassou Nguesso of the Republic of Congo can stand as a candidate in the elections next year for a third term. That is the outcome of a referendum in the central African country, which has accepted a large majority of voters.

More than 92 percent of voters voted for an amendment to the constitution that allows for a third presidential term. The turnout at the referendum, held Sunday, was 72 percent according to figures announced by the electoral commission. The opposition boycotted the referendum. An opposition leader said that the poll should be declared void because of low turnout.