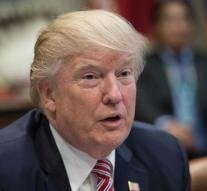 washington - Airline companies in the Middle East have not yet received any guidelines from the United States for the entry ban of President Donald Trump. That said sources in the aviation sector Wednesday against press agency Reuters.

The temporary entry ban for travelers from Yemen, Sudan, Somalia, Syria, Libya and Iran and refugees may already take place on Thursday. The Supreme Court ruled Monday that the measure could be implemented in principle.

The court ruled that the measures should only concern 'foreign citizens who do not have a bona fide relationship with a person or entity in the US'. Because no further explanation was given, many travelers in the Middle East do not know whether they will be left at the U.S. border.

According to sources, airlines from the region are waiting for US instructions. Until they get more information, they would plan to continue to export flights to the country.