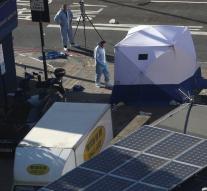 london - The man who had been killed by a mosquito bin on Monday morning might have died before the attack. This has highlighted a British Criminal Investigation Coordinator, Neil Basu, on Monday.

British media go on the authority of eyewitnesses and other authorities from the fact that there was a terrorist attack on Muslims and killed a death and ten people were injured. A white man would deliberately be invaded Muslims for an Islamic center near a mosque. But Basu said on Monday that 'the attack happened when a man got first aid on the sidewalk and that man died unfortunately. '

According to Basu, it is too early to conclude that the death of that man is related to the attack. What the driver of the van was moving is still unclear, but everything points to a terrorist attack and all victims are Islamists, according to the coordinator.