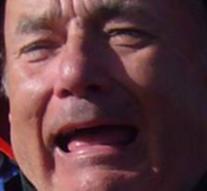 - Is it Tom Hanks or Bill Murray, who looks a bit difficult at the photo in the blog Reasons my son is crying? Just look equally good.

Sometimes you have some pictures on social media caused so much confusion that 'the internet' divides into two camps.

Think 'team blue dress' and 'team white dress,' the picture of 'The Dress' that discussion arose about what color he was real. The same happened with a picture of Tom Hanks. Whether... No, Bill Murray. Or maybe Tom Hanks?

The conscious photograph has been seen since 2013 in the blog Reasons my son is crying- a Facebook page with stories and pictures of a mother who humorously documents the eruptions of children. Recently the photo by users of social media is picked up and now everyone is wondering, it's Tom Hanks or Bill Murray?