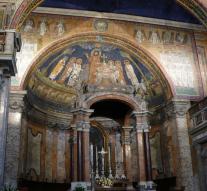 Friday destroyed the man two images in the Basilica of Santa Prassede south of the main train station. In two other churches in the area were even more images clap the confused man.

Saturday morning, the man insisted the San Vitale church in Via Nazionale inside, where he destroyed three sculptures and a candle holder. Then he took another church images in progress. By his actions the man shouted and sowed panic. The police could bring him Saturday near Piazza del Popolo.