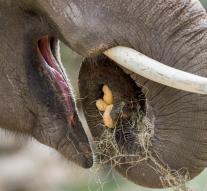 - Conservationists in Tanzania have developed an unorthodox method to prevent elephants come too close to human settlements: condoms filled with chili powder and a firecracker.

The Honey Guide Foundation, a foundation dedicated to conservation, the idea conceived a few years ago, but the spread of the method now really started. Together with the American organization Nature Conservancy, the method is now taught to volunteers.

If an elephant gets too close is first tried to chase the animal with a flashlight and a horn. Does not this, then it grabs the filled condom. The wick of the firecracker, which protrudes just outside the contraceptive is lit, then the condom towards the elephant is thrown. When the firecracker explodes spreading the powder itself. In the majority of cases, make the thick skins-turn as soon as they smell the powder.


For stubborn elephants use Roman candles, producing both a lot of noise and a bright flash.